Centerstone will be opening an FQHC (Look-Alike) at the Columbus, IN mental health center in August, 2021 in addition to the fully operating FQHC Look-Alike’s in Bloomington and Connersville, IN. These clinics will serve the medical and behavioral health needs of our underserved, rural  adult and child populations many of whom live below the poverty level.  The clinic will be staffed by Physicians, Nurse Practitioners, Psychiatrists, licensed master’s level therapists and ancillary staff.

Centerstone has one full time integrated health internship position. The intern will be an important part of the clinic and be fully integrated into the treatment team. Referrals will come from both medical and psychiatric providers. The intern will be available for warm handoffs from the physicians and NP’s to immediately engage with and begin interventions with patients. Treatment will primarily be brief and problem focused, and cover a very broad range of diagnosis, from severe and persistent mental health diagnosis, to adjustment disorders. There will be opportunities to provide crisis assessment, intervention and stabilization. The intern in this position will be working with patients with both acute and chronic physical and mental health concerns.  Interns will work with patient on topics of weight management, issues around compliance with diabetes or other health regimens, pain management, and improving sleep. Psychoeducation will be provided to patients when needed.  The emphasis will be not on merely practicing psychology within the same clinic as the medical providers, but in helping the team treat the whole person, addressing the behavioral interventions that can augment medical care to help improve treatment compliance and improve the quality of the patients life.

Interns at Centerstone will also have access to Relias, an online training application. There are a wide variety of clinical topics available.

Interns with Centerstone will generally work a Monday – Friday schedule from 8:00 am – 5:00 pm each day with one hour for lunch. No weekend work or after hours on-call is required. Interns may elect to have patient contact hours after 5:00 pm with an adjusted start time for the day per approval and supervisor availability.

Please note that not every experience is identical and site schedules are a general guideline. Interns may be required to make themselves available at other times as needed. What is provided above is an example of what the work week might look like for an intern at this site.

It should be noted that Columbus, Indiana, is 2 hours and 17 minutes away from Logansport, Indiana, where quarterly in-person didactic training is held. Due to the distance, interns at this location will be provided with some travel reimbursement considerations for monthly didactic training. 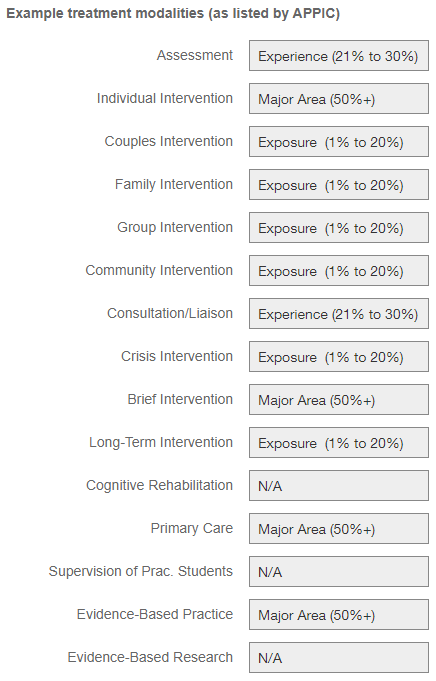 As Centerstone is a large community mental health clinic, we treat an array of diagnoses and issues that affect members of our community. Common concerns include depression, anxiety, trauma-related disorders, psychotic disorders, and substance use. Centerstone is a trauma based center and we see a high number of clients who have experienced significant trauma as a child or adult. 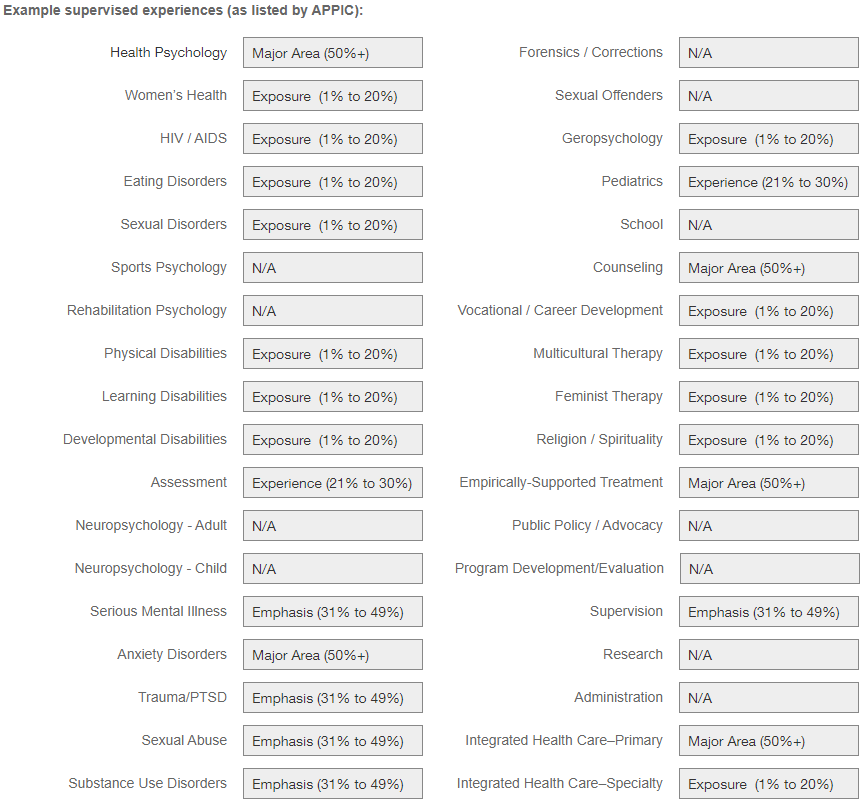 The FQHC is designed to serve a rural and underserved population and may live below the poverty level.  Many of the clients will have a severe and persistent mental illness in addition to chronic medical problems. Others may have behavioral health issues that contribute to noncompliance with their recommended medical regimen. The FQHC Look Alike will serve people across the lifespan.

While we won’t know your exact supervisor assignments until the internship starts, these are examples of some of the individuals you may work with over the course of your year at the site.

Dr. Sklar is the Training Director for Centerstone. He is a licensed psychologist in the state of Indiana with the Health Service Provider certification. He received his Ph.D. in Psychology from United States International University in San Diego, California. His research interests explored the psychological impact of infertility in men and women. In his 30+ years with Centerstone, he has worked in an inpatient setting for adolescents, provided care for children, adolescents, families and adults with a wide range of diagnoses. He has worked in an EAP within a medical clinic and has over 20 years’ experience in after hours and emergency room crisis intervention. He has experience in private practice and has supervised numerous practicum students, predoctoral interns, and postdoctoral residents. He practices from a Humanistic-Existential perspective with an emphasis on CBT.

Dr. Davis is a licensed psychologist in the state of Indiana. She completed her Psy.D. in Clinical Psychology from the Chicago School of Professional Psychology. She is a clinical psychologist working for almost 20 yrs in rural southern Indiana for a community mental health center. Suicide prevention is a primary focus, and she is an ASIST trainer. She is also involved with the CIT (Critical Incident Team) with local law enforcement and hospital staff.

Dr. Lamborn is a licensed clinical psychologist in the state of Indiana.  He completed his Psy.D. in Clinical Psychology from Central Michigan University.  He has been a practicing psychologist primarily in a community mental health center setting beginning in 1993.  During this time, he was the Director of the Quinco Behavioral Health System Pre – Doctoral Internship Training Program.  He has been the Assistant Department Chair for Behavioral Sciences and Associate Professor of Psychology with Ivy Tech Community College Columbus since 2008.  He has also been an adjunct professor for both the undergraduate and graduate Mental Health Counseling Program with Indiana University Purdue University Columbus, primarily providing clinical supervision with their graduate students.  He is also a trained provider of Mental Health First Aid and faculty advisor for Ivy Tech’s Hope Squad.  His theoretical orientation is Neo – Freudian/Interpersonal.

Dr. Schwendener-Holt was trained as a Counseling Psychologist. She holds the HSPP and APBB (board certified in Clinical Psychology) certifications. She also has a M.Div degree.  Her clinical interests are varied but is most interested in “normal” people experiencing difficulties in life. She’s had a wide-ranging career with positions as a police/fire psychologist, college professor, state hospital psychologist, addictions specialist, and in private practice.  She is currently a Veterans Administration psychologist in home health. Her specialty areas are working with trauma, veterans, EMDR, and women’s issues. She is a mindfulness mentor who believes everyone has the capacity to grow and change. Her current passion revolves around being a Forgiveness Practitioner, and is writing a book on this subject.

Dr. Darla McKeeman is a licensed psychologist with over 30 years of experience, working in inpatient, outpatient, healthcare, non-profit and private practice settings.  In 1987, she received her Ph.D. from Arizona State University in Tempe, Arizona.  Her research, published in the journal, Addictive Behaviors (1991), explored the relationship between cognitive complexity and affect variability in smoking cessation.  She practiced and was licensed in Arizona and Texas before returning to her home state of Indiana in 2000.

Since 2000 she has worked for several non-profits, including Centerstone, Turning Point Domestic Violence Services, and Family Services of Bartholomew County.  In 2016 she opened a private practice, Resiliency Counseling and Consulting. LLC, located in Columbus, Indiana.  She provides crisis, short-term and long-term therapy to adolescents and adults who present with a wide range of issues.

Dr. McIntire’s practice began post-MSW in the 1980s prior to pursuing her doctorate. She has worked in multiple clinical settings including inpatient, outpatient, IOP, residential, school-based, and emergency services, generally but not exclusively with children and their families. Her emphasis in her PsyD program, which she completed in 2005 at University of Indianapolis, was neuropsychology as well as psychological evaluation. Dr. McIntire also has an extensive academic background, both as adjunct and a full faculty member, teaching undergraduates as well as in the PsyD program. Since 2008 she has owned a private forensic practice, where she has enjoyed supervising doctoral practicum students while conducting court-related evaluations of youth and adults. Her professional interests, as consistent with her biological and family systems orientation, include the impact of neurophysiology and family dynamics on human functioning, and working within the interface of mental health and the legal system.

Life In Columbus, IN…

Columbus, Indiana (pop. 47,665) is the 22nd largest city in Indiana. It is best known for it’s mid-twentieth century architecture and is ranked #6 in the country for the number of buildings designed by world class architects earning it’s nickname “Athens of the Prairie”. Columbus has a strong corporate presence and has always ranked highly by national publications as being a good place to have a business. It is the headquarters of Cummins Engine Company, a worldwide manufacturer of diesel engines. Columbus boasts three college campuses, Indiana University-Purdue University (IUPUC), Ivy Tech State College, and the Purdue Technological Center.
Weather in Columbus ranges from an Average low temperature in January of 19.9 F to an average high in July of 85.2 F. Rainfall is an average of 46.5 inches per year and there is approximately 15.0 inches of snow. There are about 185 sunny days per year.
For recreation, there are a number of sports leagues, athletic facilities, 200 acres of parks and green space and over 20 miles of walking and bike trails throughout the city. Throughout the year, there are a number of festivals, music events, street fairs, wineries, farmer’s markets, and a children’s museum. Columbus also has its own symphony orchestra and band. The downtown area has a number of shops and restaurants. Restaurants range from casual to fine dining.  Columbus is 30 minutes from the beautiful Brown County State Park and 45 minutes from Bloomington, Indiana home of Indiana University.  For those wanting a larger city experience, Columbus is 50 minutes south of Indianapolis, 75 minutes from Louisville, Kentucky, and 2 hours from Cincinnati Ohio.
Note: Interns moving to Indiana will need to get their license plates switched to Indiana plates per state guidelines. Read more here.