Compass Health’s outpatient internship placements are divided into regions, as all outpatient offices offer the same core internship experiences, with additional possible experiences variable by location (see below). Specific office locations will be assigned following the internship Match. Each office is equipped with the testing and training materials necessary for the interns to complete the requirements of their training year.

Potential office locations within this region include:

Primary experiences at all Compass Health sites include:

Additional experiences are listed below, along with the offices at which they may be available. An average of 15-20 intervention hours per week is expected and a minimum of ten psychological evaluations are completed during the training year. Services provided range from brief individual or family counseling dealing with issues such as depression and anxiety to long-term care and support for adults with serious mental illness and children with serious emotional disturbances. Psychology interns at Compass Health sites utilize both hands-on training as well as web-based training programs. The agency offers a full training library of web-based programs for the interns and staff to access as they are able based on their licenses/interests.

Additional training experiences that are subject to location/availability include:

Interns with Compass Health will generally work a Monday – Friday schedule from 8:00 am – 5:00 pm each day. No weekend work or after-hours on-call is required. Interns at this location will spend all their time in their assigned outpatient offices, to be determined following the Match. Daily schedules will vary based on intern interest and need, though a sample schedule is shown below.

Please note that not every experience is identical and site schedules are a general guideline. Interns may be required to make themselves available at other times as needed. What is provided above is an example of what the work week might look like for an intern at this site.

Each location in this region is approximately one to three hours from the didactic training site in Springfield. Offices that currently host interns include Columbia – Woodrail, Columbia – Berrywood, and Wentzville. 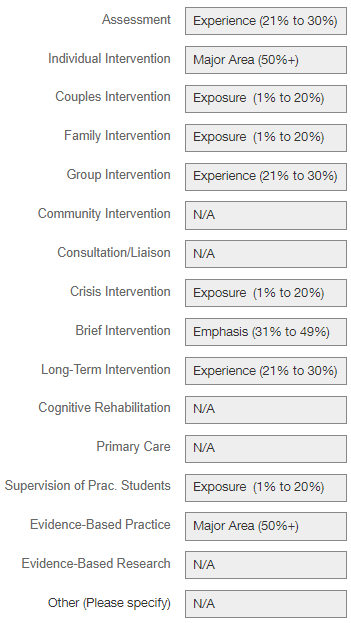 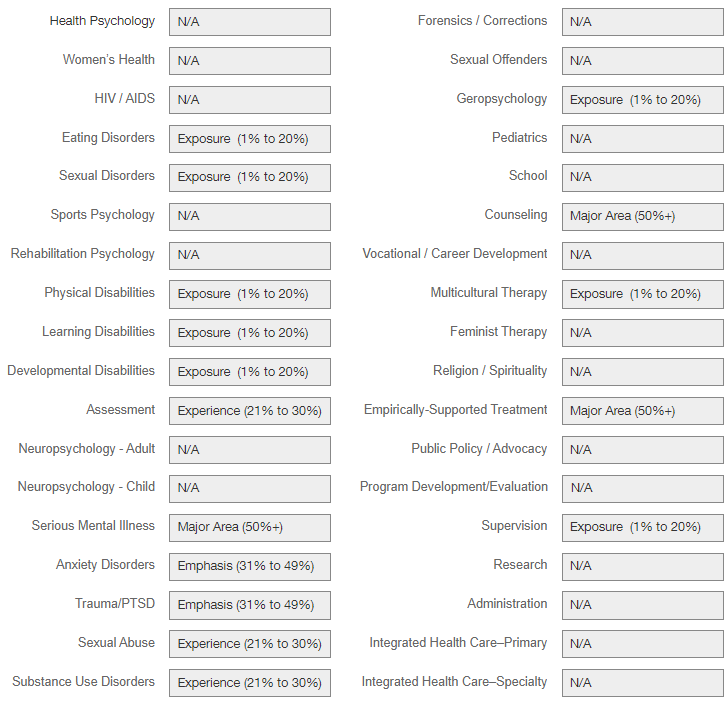 Most Compass Health clients are Caucasian, chronically mentally ill, and/or lower SES. Patients at our locations often manage barriers such as transportation, cost, and childcare. Many of our areas served do not have public transportation, and thus the cost of a vehicle and gasoline, as well as car insurance, can cause difficulty. In addition, many of our clients do not have access to affordable childcare, which is also a barrier to them receiving treatment.

Our larger offices tend to be closer to larger cities, and as a result serve a more diverse clientele with higher levels of education and SES. We serve the lifespan with respect to therapy and assessment. The following table shows a breakdown of some patient demographics across the agency from the fiscal year 2020:

While we won’t know your exact supervisor assignments until the internship starts, these are examples of some of the individuals you may work with over the course of your year at the site.

Dr. Muehlbach earned her degree in Clinical Psychology in 2011 at Forest Institute of Professional Psychology, receiving her master’s en route (with certificates in Integrated Health Care (IHC) and Marriage and Family Therapy (MFT)). She completed her internship and post-doctoral residency at Pathways Community Health in Rolla, MO. She has training and experience in a variety of settings, including community mental health, residential treatment, inpatient, and FQHC. She has developed a specialty interest in psychological assessment, working with both children and adults. She currently has the honor of serving as Deputy Chief Clinical Officer (DCCO) of Outpatient and Psychological Services. Dr. Muehlbach has had the opportunity to provide supervision to advanced doctoral and master’s level practicum students as well. She also has experience providing individual, family, group, and couples counseling. Her theoretical orientation emphasizes aspects of interpersonal, cognitive-behavioral, and person centered approaches, while utilizing a multicultural lens to provide further understanding of her clients.

Dr. Ashley earned her doctoral degree in Clinical Psychology in 2016 at Wright Institute, receiving her master’s in Marriage and Family en route. She completed her internship and post-doctoral residency at Compass Health Network in Rolla and Columbia, MO. She identifies as a Generalist and has experience providing psychological assessment and therapy in a variety of settings, including community mental health, college counseling, and private practice. Her specialty interest is in psychological assessment with all ages, for a variety of presenting issues, with specialty training areas including Autism Spectrum assessment, DBT, couples therapy, and neurofeedback. Her theoretical orientation can be described as Systemic in theory and CBT in practice. Dr. Ashley has been providing supervision since 2017 and also serves as a Director of Outpatient Services.

Dr. Larson is a licensed psychologist in the state of Missouri. She has had training and experience in a variety of settings, including community mental health, university counseling, residential treatment, inpatient, and private practice. She has developed a specialty interest in psychological assessment, working with children and adults. Her current work focuses primarily on comprehensive psychological assessment of intellectual and cognitive processing, academic achievement, disability determination, autism spectrum, mood, anxiety, and personality. Further, in her training, she has had the opportunity to provide supervision to advanced doctoral and master’s level practicum students. She has also had experience providing individual, family, group, couples, and career counseling. Additionally, she is passionate about issues of diversity, activism, and social justice, and especially enjoys working with the LGBTQ community. Her theoretical orientation includes a combination of person-centered, CBT, and multicultural, and her research interests include positive psychology and gratitude.

Dr. Meriweather earned her Ph.D. in Clinical Psychology from California School of Professional Psychology – San Francisco in 1996. She completed her internship at Children’s Hospital – Los Angeles, and her residency at Burrell Behavioral Health in Springfield, MO. She has experience across a range of settings, including leadership coaching, teaching, consulting, research, creation of various curricula for the community and professionals, health psychology, integrated care, and psychological assessment.

Dr. Jaedyn Bonner is a postdoctoral psychology resident. Dr. Bonner completed her pre-doctoral internship at Compass Health Network during the 2020-2021 internship year. She received her B.S. in psychology from Howard University in Washington, DC in 2016 and went on to receive her Ph.D. in clinical psychology from Jackson State University in Jackson, MS in 2021. Dr. Bonner utilizes a Cognitive Behavioral Therapy approach with many of her clients while also utilizing multiple other theoretical orientations based on clients’ needs. Additionally, Dr. Bonner has training in Dialectical Behavior Therapy (DBT) and is a co-leader of the Wentzville office’s first adolescent DBT skills group. Along with CBT and DBT, Dr. Bonner has also been trained in trauma treatment approaches (e.g., Written Exposure Therapy) and continues to use evidence-based approaches for trauma treatment (e.g., Cognitive Processing Therapy). She also conducts psychological assessment with individuals across the lifespan for a variety of presenting problems (e.g., personality, cognitive, ADHD). Dr. Bonner also assists in the clinical and professional development of pre-doctoral interns and practicum students at Compass Health.

Dr. Daniel Franco is a licensed psychologist who has been with Compass Health since 2019. Dr. Franco received his BA in Psychology at the University of Notre Dame, and was a varsity letterman for the Notre Dame Football athletics program. He earned his MS and PhD in Counseling Psychology at the University of Kansas, with an emphasis in Sport Psychology, individual therapy, and psychological/neurodevelopmental testing with adolescent and college-student populations. Dr. Franco received his internship training at the Oklahoma Health Consortium, completing rotations through the University Counseling Center (Goddard Health) and OU Athletics Department (Psychological Resources for Oklahoma Student-athletes). He received his post-doctoral residency training at the MU Thompson Center for Autism and Neurodevelopmental Disorders. The majority of Dr. Franco’s clinical work entails testing services for Autism, ADHD, and neurodevelopmental disorders for children, young adult, and adult populations. Dr. Franco takes an integrative approach to client conceptualizations that is heavily grounded in the Contextual Model of psychotherapy. His primary modalities include CBT, ACT, IPT, SFT, and MI when formulating treatment interventions. Dr. Franco also provides clinical supervision and vertical supervision for postdoctoral trainees.

Columbia is a town of about 110,000 (plus the MU student population). It is about a 30 min drive to Jefferson City (the state capital) and a 2 hour drive to either St. Louis or Kansas City, conveniently located off of Interstate 70.

There are several nice apartment complexes and houses for rent in the Southwest area of Columbia. Kelly complexes are highly recommended: Kelly Ridge, Kelly Farms, and Kelly Highlands. This is also a great area for schools. Suggested living areas are south of Stadium Boulevard and west of Providence Road (southwest of MU); otherwise, commute times will increase significantly. There is a public bus system, as well as Uber and Lyft, but it would be very difficult to live in Columbia without a car.

To avoid noise and traffic in Columbia and Jefferson City, avoid living near campus, the capitol, and downtown.

Ashland is a small community, approximately 3,000 people, and doesn’t have much in the way of restaurants or shopping—but it makes up for it with being quiet and quaint, with lots of open land and wildlife. Ashland is halfway between Jeff City and Columbia, the two largest cities in the area. Both JC and COMO have things that the other does not—restaurants, shopping, entertainment, arts districts, historical sites, so Ashland is popular for being equal distance from both. Ashland is also 15 minutes from I-70 (which will take you to Kansas City and St. Louis, both about 90-120 minutes away). There are many new subdivisions being built in Ashland, so the area has real estate available. The area does lack apartments for rent; however, there are houses available to rent. 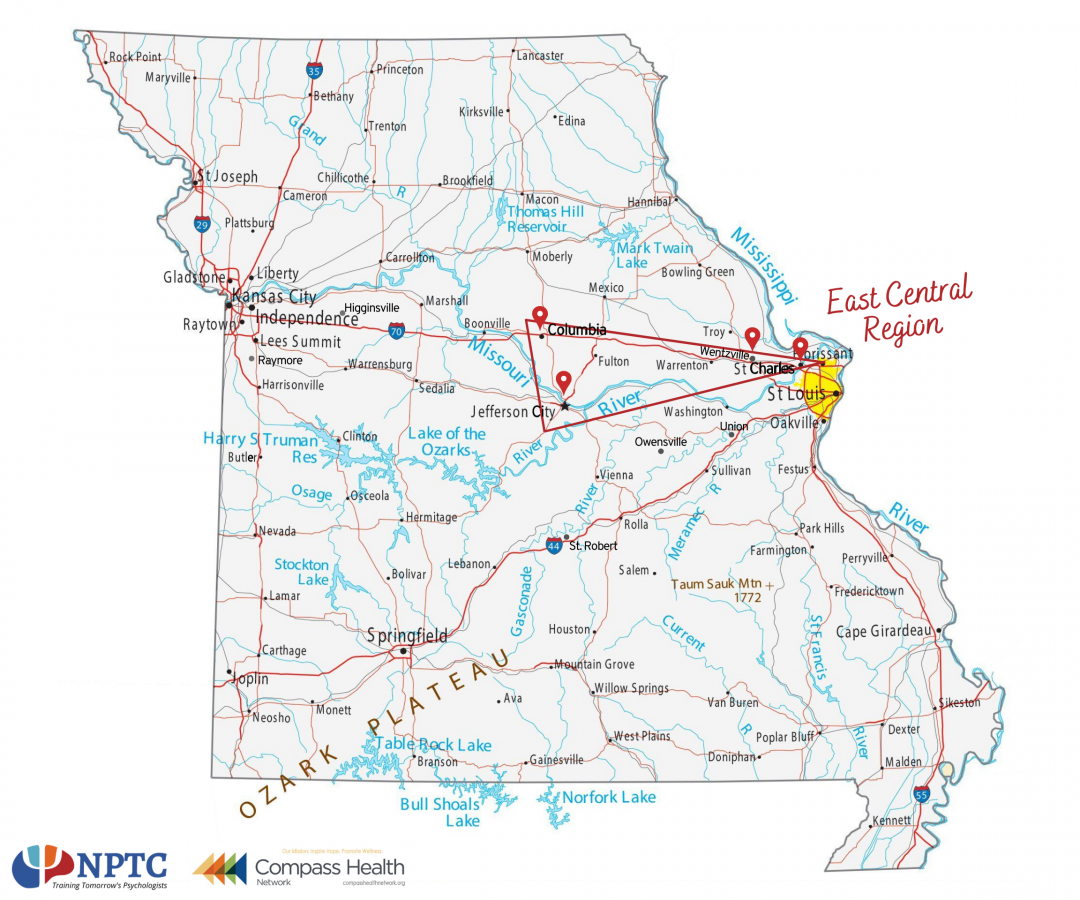